On a mission to find Milwaukee's Best Bloody Mary

Memorial Day was cold and wet so TJ took me on a little adventure.  He was craving a burger, and knew I’d be pleased with a bloody.  So, off to Oscars we went.

When you walk into Oscars at 1712 W. Pierce Street, one could easily say it’s been there forever.  False.  According to their website, Oscars opened in 2011 by a husband-wife team.  With the likes of George Strait and Travis Tritt playing as a soundtrack, it felt incredibly cozy and welcoming.  We saddled up the bar and were quickly attended to. 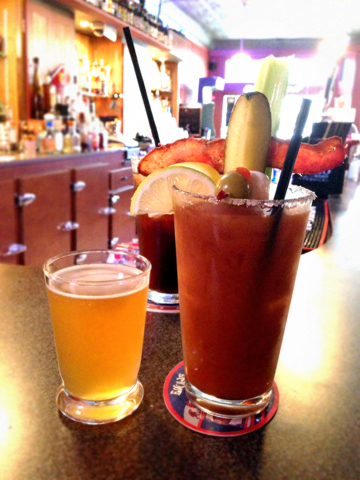 Here’s what I thought of their bloody

Mix: The bartender insured me their bloody is a house mix.  As we were at the other end of the bar, I didn’t see how it was created.  It was pretty tasty!  It had a good tomato flavor with a faint smokey flavor achieved with  Chipotle Pepper sauce.  It didn’t have as much spice as I’d prefer so maybe next time, I’ll ask for some Tabasco.

Garnish: This came with your typical celery, pickle, lemon, lime, olive which were all very fresh and crisp.  To make it unique, it also came with a ball of mozzarella and a huge, thick slice of bacon.

Chaser: Without asking, this came with a chaser of Shock Top.  It was a good pair.

Buzz: Light to moderate buzz achieved at Oscars on Pierce.

Rumor has it, the owner used to work for Sobelmanns, which is interesting to me.  After having tried both, I have to say there is a clear winner for me.  TJ’s burger was simple yet tasty and my bloody was a clear winner having been a house mix.  Long live the rebelling entrepreneur.  This place is a little hidden gem of Milwaukee – maybe not for much longer!